On Caucusing in Iowa: A Short Essay that Ends with a Poop Joke 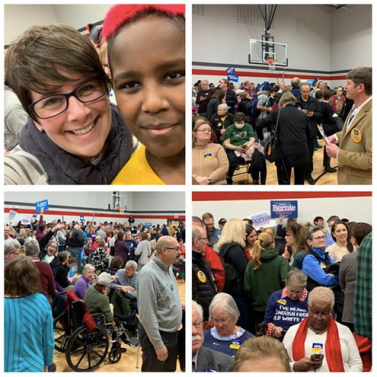 I’m an Iowan. Every 4 years, we talk about how the caucus disenfranchises people—for hundreds of reasons. And it does. The caucus is designed for an era —one that likely never existed—in which every shop on main street shut at 5, and there were no factories running overtime in Iowa’s small towns. Kids could play in the gym with a few local teens babysitting while the adult community managed the necessaries of citizenship.

If that ever did exist, it doesn’t anymore. We need a better solution. A primary. A caucus run on a rotating time schedule. Preference cards for people who can’t or don’t want to stay for conversation and alignment. Whatever.

That does not mean this caucus is irrelevant or meaningless or that it doesn’t offer useful insight for the political parties who run it.

A candidate who does well in Iowa has a shot at doing well in NH and beyond. A candidate who can survive the months and months of conversations, canvassing, and meet-and-greets here has a finger on the pulse of a part of American life that is both rural and urban, educated and not, farmers and business people, teachers and stay-at-home moms, domestic workers and salespeople. And surprise! We come from a myriad of races and cultures. Are we as diverse as a LA or Chicago? No. But we are smaller than they are by a long shot.

Bottom line, this is a place where candidates must meet and answer serious minded people who take caucus politics seriously.

Case in point: 12-15 junior and senior students, calling themselves “Caucus Club,” have met in my classroom once a week for the last five months. They’ve been grilling campaign staffers, registering their classmates, canvassing for their chosen candidates, and planning a mock caucus to train other students on what to do. I have personally heard them ask tough questions about Kamala’s history with trans folks, Bernie and Biden’s sexism, Yang’s viability, Steyer’s stance on student debt, and more.

Students and precinct captains, members and leaders of the respective parties, staffers, and even the candidates themselves toil endlessly, engaging everyone in a conversation that matters deeply.

We serve our country by being a first testing ground for candidates.

So when caucus time comes around, I show up. I am privileged enough to go, so I go. While there, I try to be a good citizen. I help the visibly disabled folks around me (those who’ve made it) to manage the difficult parts of the caucus (including keeping your left hand raised for sometimes as long as 10 minutes). I giggle with the kids in the crowd who are bored and drawing or reading on blankets on the gym floor. I cheer on my high school students who are there for their first time, thanking them for being involved in a strange and demanding version of the political process. (Honestly, I also play solitaire on my phone because some of it IS boring.)

Every time I caucus, I feel glad that even if no one pays much attention to this small part of the world most of the time, we do get an opportunity to participate in it—in a big way—every few years.

That said, I’d give up even this privilege for a more equitable system, and I think most Iowans would.

So, instead pooping all over us in newspapers or Facebook feeds and treating us like a joke, I think “thank you” would be more appropriate.

We have plenty enough poop here after all.

One thought on “On Caucusing in Iowa: A Short Essay that Ends with a Poop Joke”